By Simon Harper
| over 1 year ago
InspireJourneysItalyBeautiful journeys

On the splendid European railway map, there are railway lines which follow the Mediterranean Coast for virtually its entire length from Valencia in Spain, round to the 'foot' of southern Italy.

So journeys by train between Port Bou and Perpignan, Nice and Albenga, and between Genova and La Spezia offer fabulous views of this coast, but they can be fleeting, with glimpses of a spectacular shore-line between rocks, cliffs and buildings.

But this journey by train from Roma via Napoli to Sicily provides for more than three hours of incredible sea views, so it is ShowMeTheJourney's top pick for a European coastal train journey;and then for extra thrills the train gets loaded on a ferry for the sea crossing from mainland Italy! 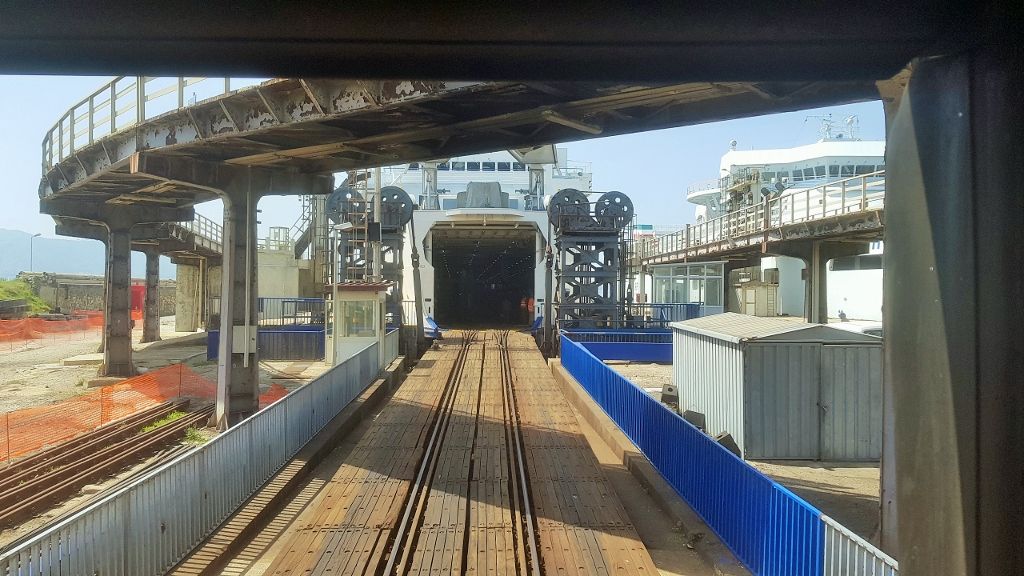 If you board in Roma, for the first 3hr 30min of the train ride, there is nothing particularly exceptional about this journey and this also applies for the first 90 minutes when heading southwards from Napoli.
The rural landscape that can be seen from the train is often beautiful... 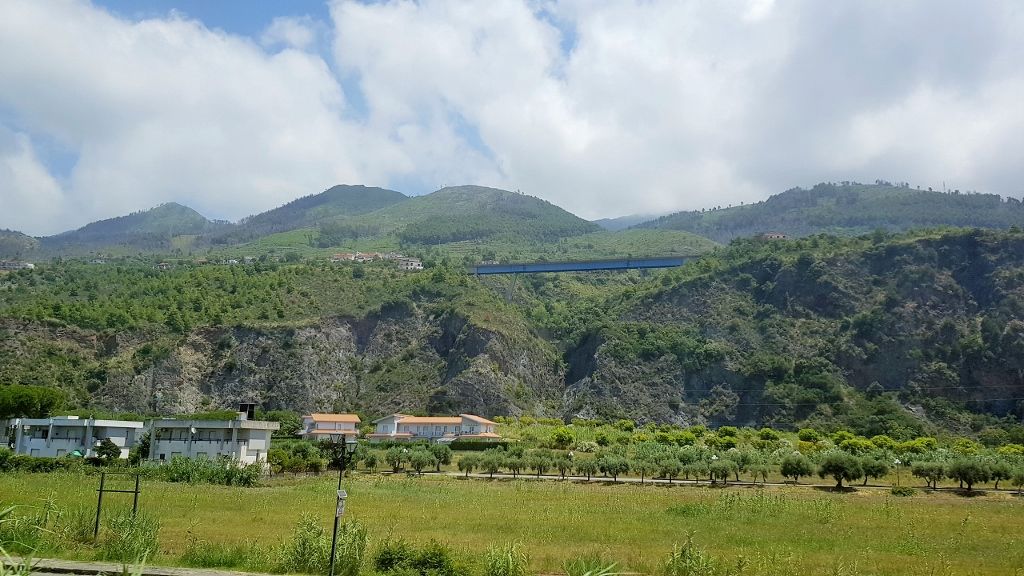 ...but that is true of many Italian railway routes.

The first spectacular views of the Mediterranean, south of Salerno, come just after the train has passed through Ascea, but on this part of the route the coastal views are between tunnels, so look out for views like this one. 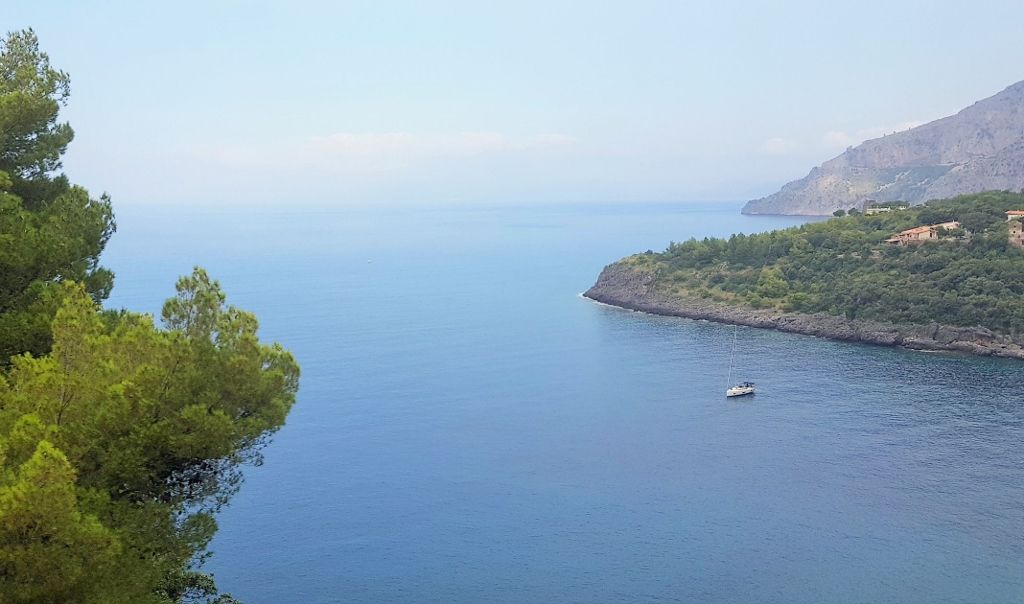 The railway line then once again turns away from the sea for around 20 minutes of the journey, but it re-emerges on the coast to the north of Sapri. 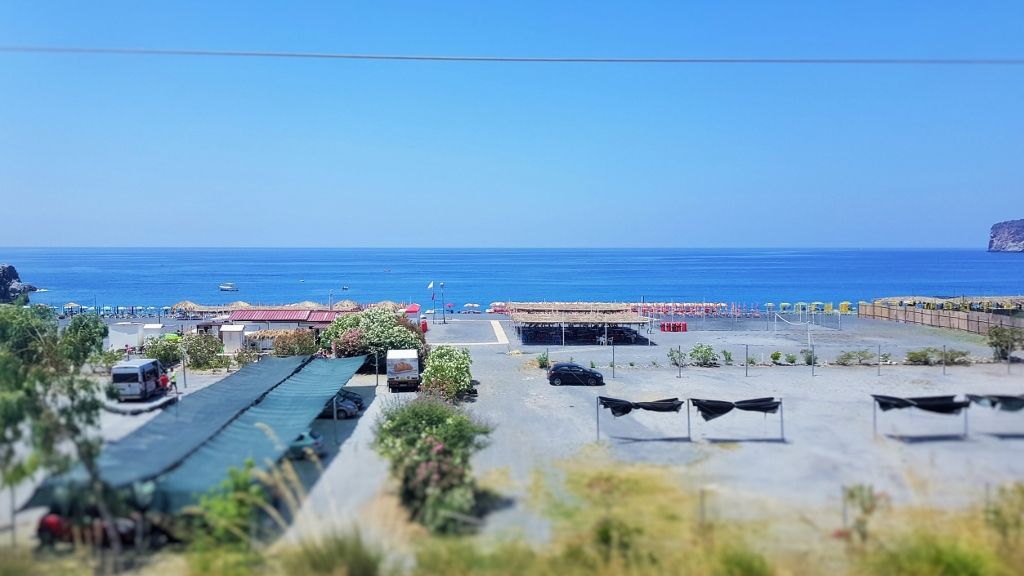 Between Sapri and Tortora a large percentage of the railway line is once again in tunnels, but between them, the views of the coast are particularly special.

I can't be 100% certain about this, I was travelling on a fast moving train and was overwhelmed by what I was seeing, but I think this video was captured on this part of the journey.

On the train ride between Napoli and Sicily the coast is on the left, however, seat reservations on these trains are mandatory, but on this trip luck wasn't on my side, so my seats were on the right.
Hence I headed to the rear of the train as there are windows on the door, which provide for a spectacular route back down the railway line.

As will be seen from the series of images below I didn't restrict myself to solely capturing that video. 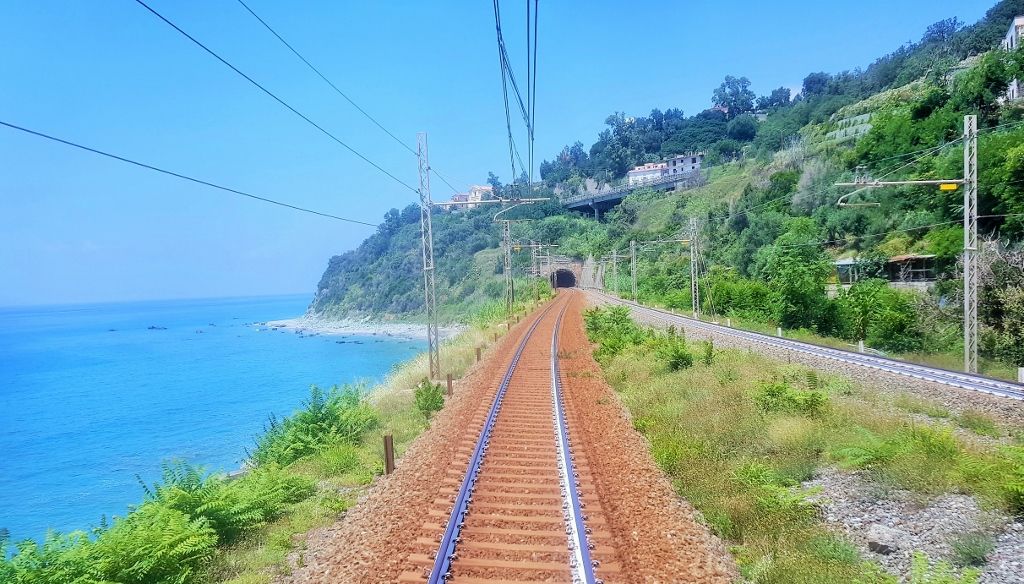 If ShowMeTheJourney ever has the opportunity to publish a book, that image above will be on the cover! 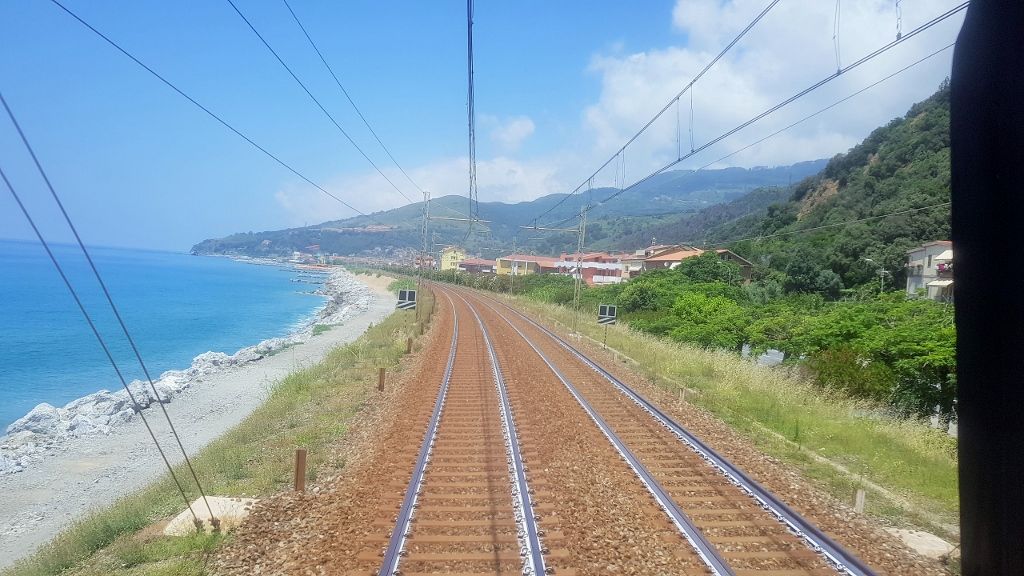 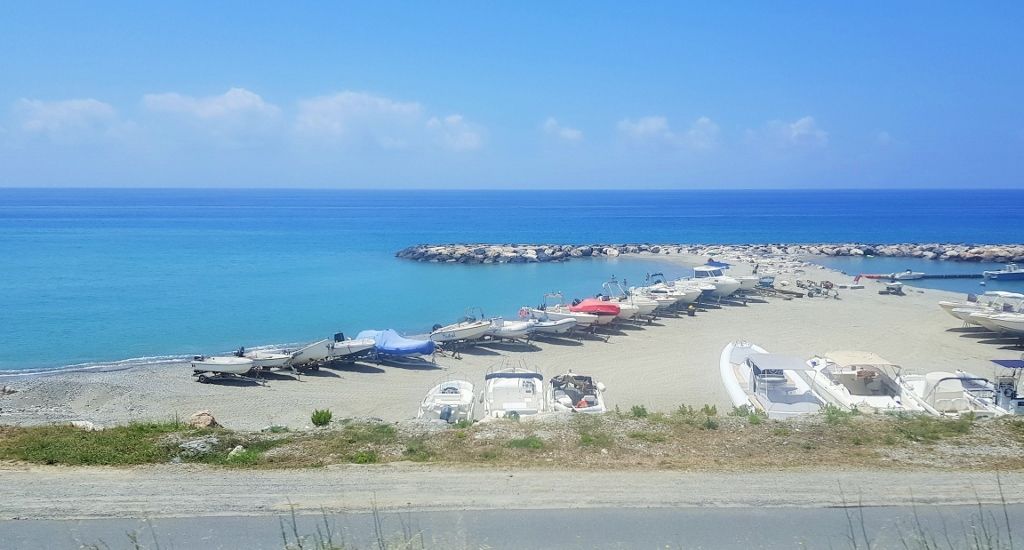 From Cirella to Lamezia Terme, the train spends most of this part of the journey travelling right beside, or just meters away, from the sea for more than an hour!

I'm fairly certain the view below was captured as the train passed through Campora San Giovanni. 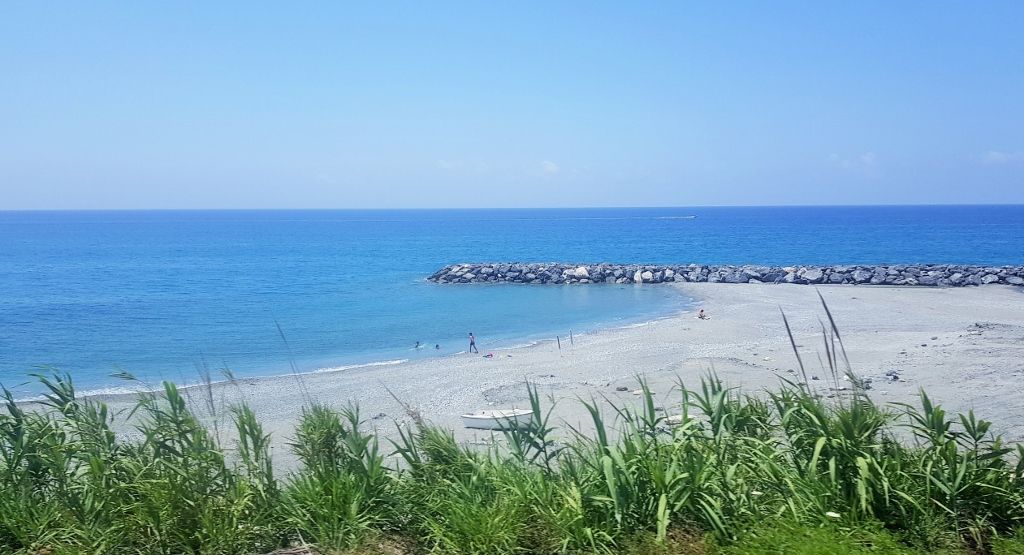 Between Lamezia Terme and Pizzo, the railway is higher up towards the cliff tops, which provides some of the most spectacular views on the entire route, though the bright sunlight made it difficult to capture the beauty. 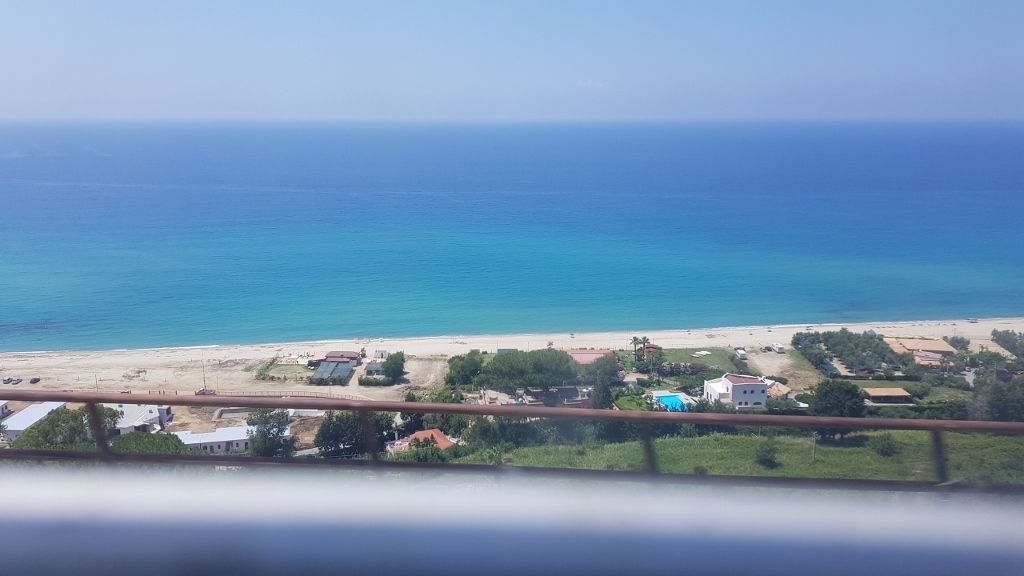 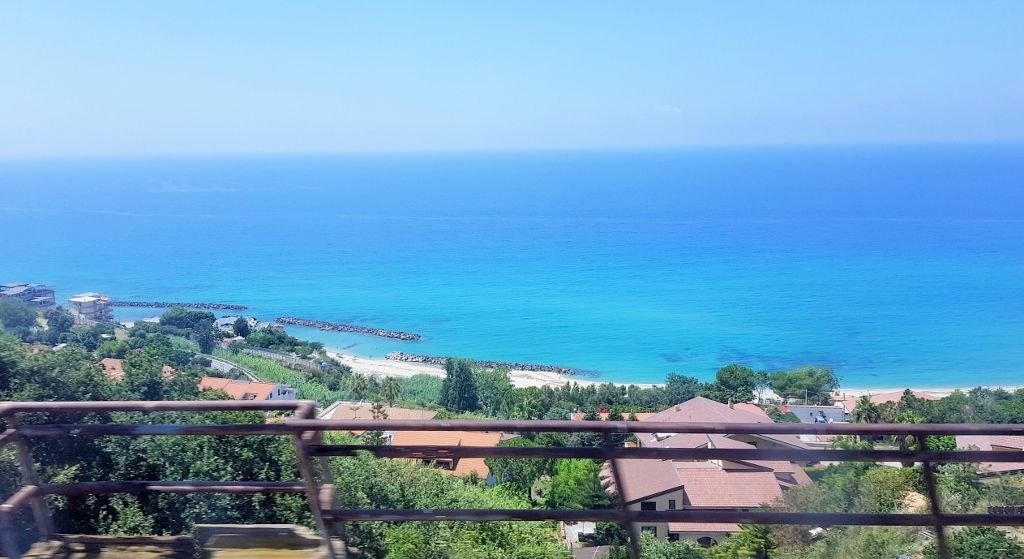 Once the train has reached Pizzo, you will have experienced the best of the views on the part of the journey in mainland Italy, but if your seat is on the left you will have been appreciating virtually continuous sea views for around 2hr 30 minutes.

However, you haven't yet since the final views of the coast, because the railway line once again runs by the sea between Bagnara and Reggio di Calabria,.
The landscape is more industrial here, but on a clear day it's possible to look across the water to Sicily, shimmering in the distance. 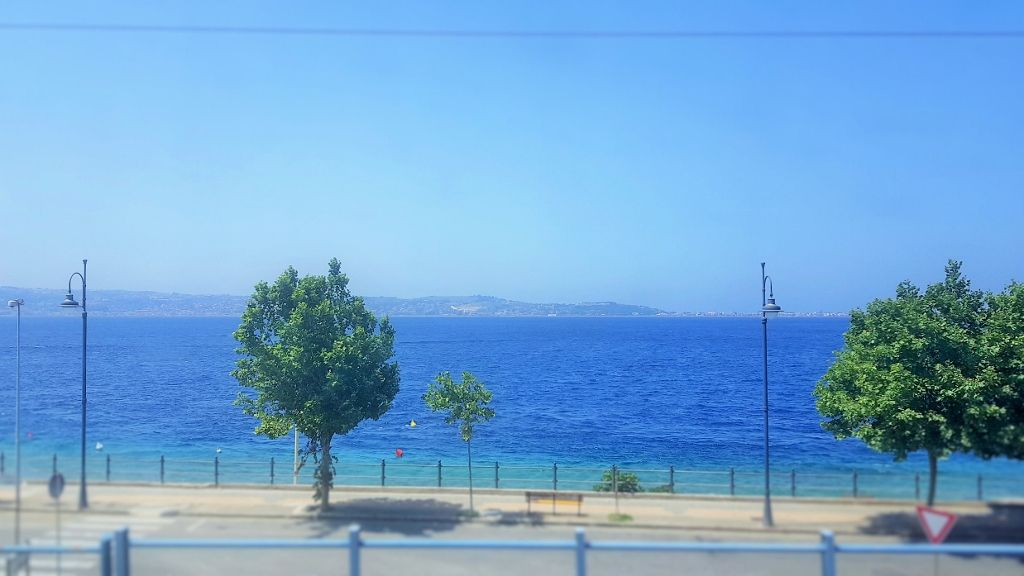 When the train arrives in Reggio di Calabria station, the locomotive that has hauled the train from Roma is detached, which cuts off the power supply to the coaches and therefore disconnects the air-conditioning; so in Summer the temperature on the train rapidly rises.
Many people get off the train and wait on the platform in the fresh air, for the next part of the journey to commence, which is the loading of the train on to the ferry.

Once the train is on board, you leave it and ascend up to the deck, from where the views can be wonderful. 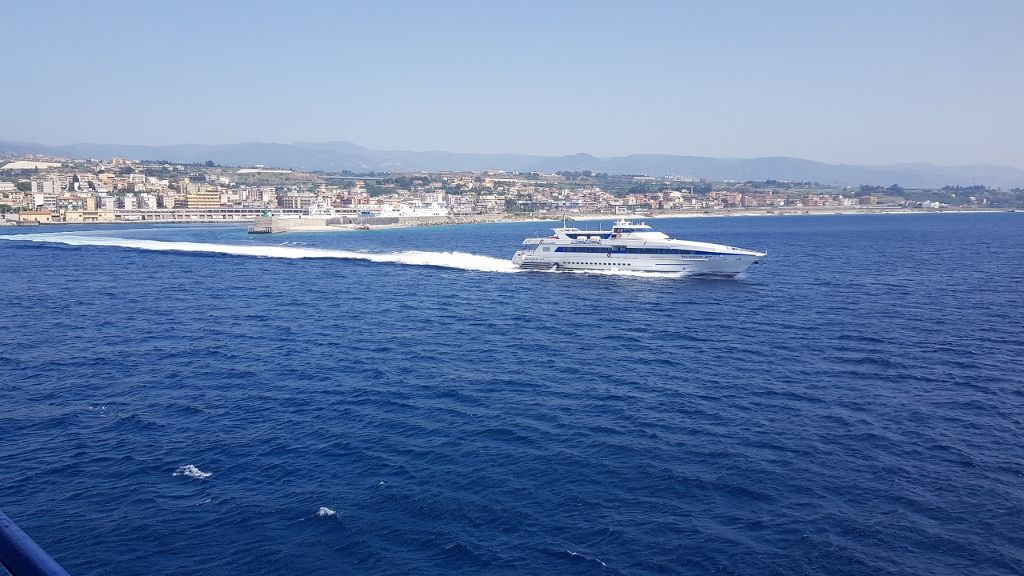 Shortly after the train is pulled off the ferry it arrives in Messina station, where another locomotive is attached, turning the air-conditioning (or heating) back on.

The train splits on departure from Messina, one half heads across the beautiful northern coast of Sicily towards Palermo, while the other half heads south to Siracusa via Catania.

On the train ride south of Messina towards Catania, the coastal views switch to the RIGHT and for the initial part of the journey, you can look back across the water to mainland Italy. 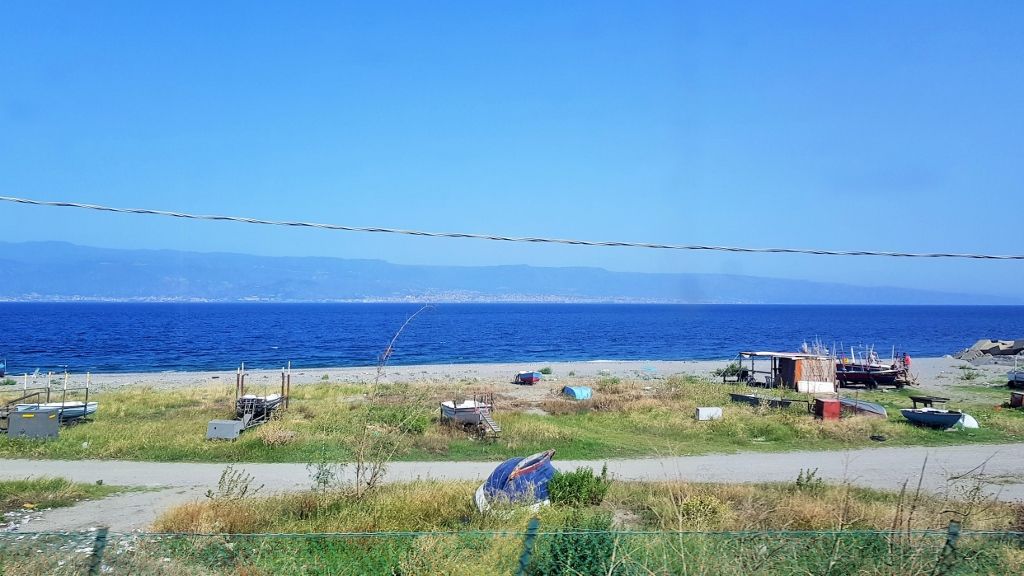 Then comes the final highlight of the journey, the wonderful views of the bays to the north of Taormina. 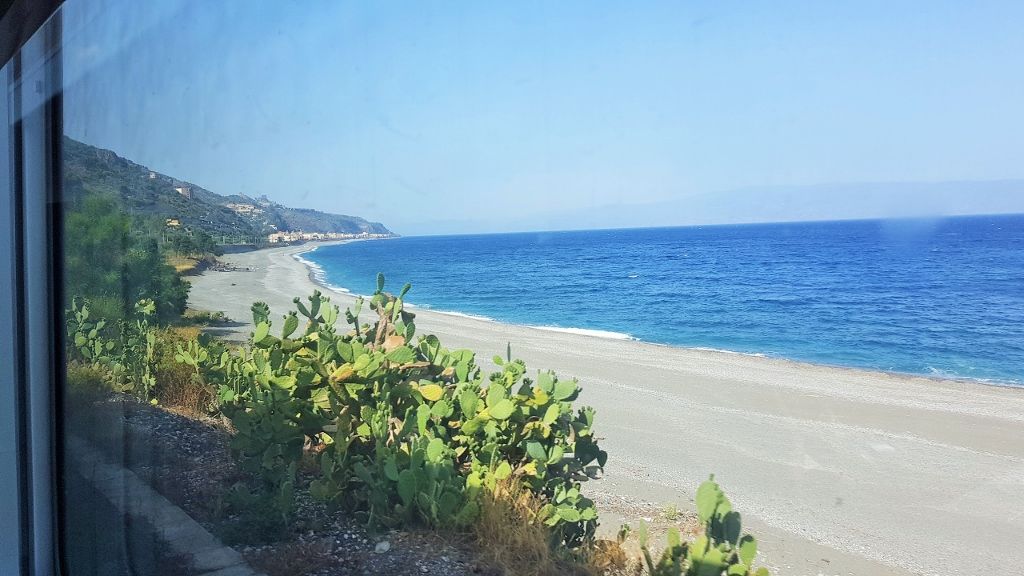 It's these views which has led ShowMeTheJourney to award this Roma and Napoli to Taormina journey, a place on the most Epic Express Train journeys list, instead of the journey to Palermo. 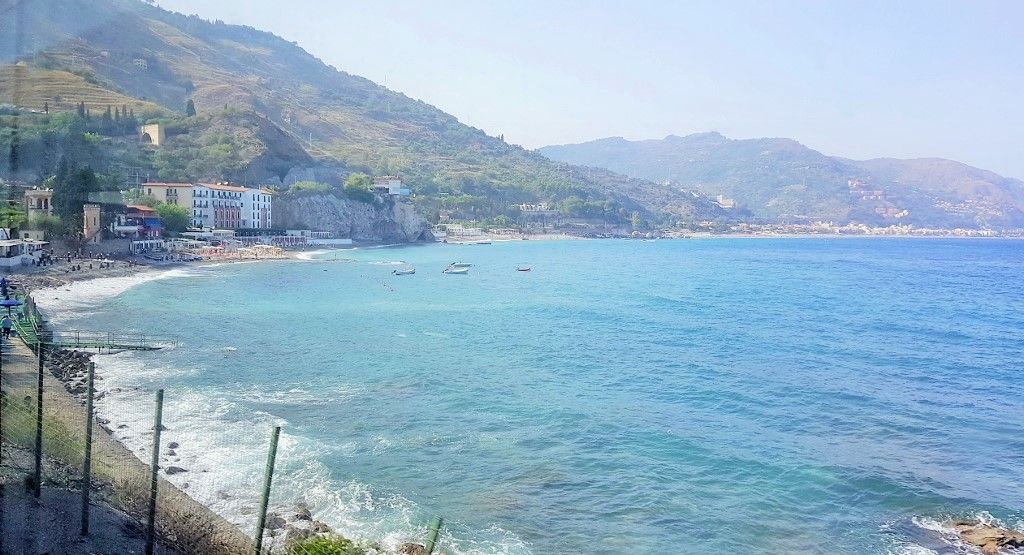 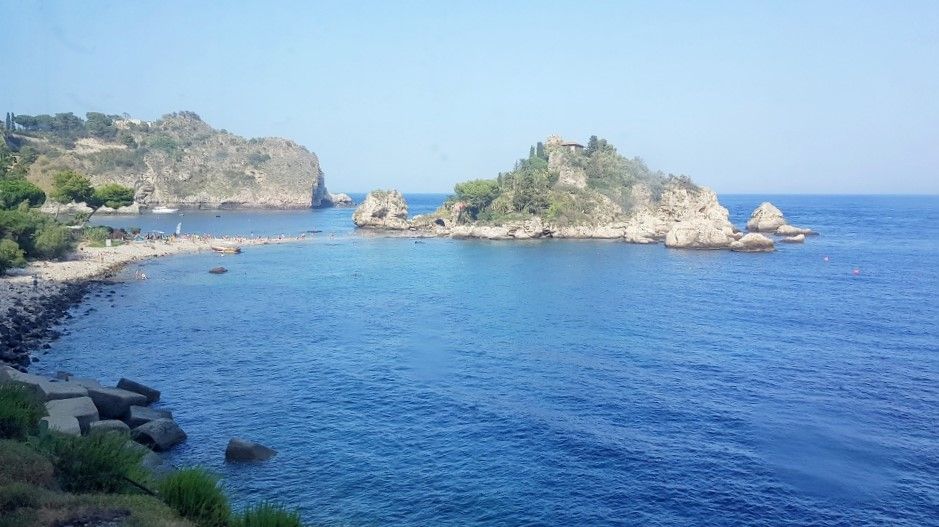 When travelling to Taormina by train, you'll have a spectacular conclusion to your journey, as the station is beside the marina. 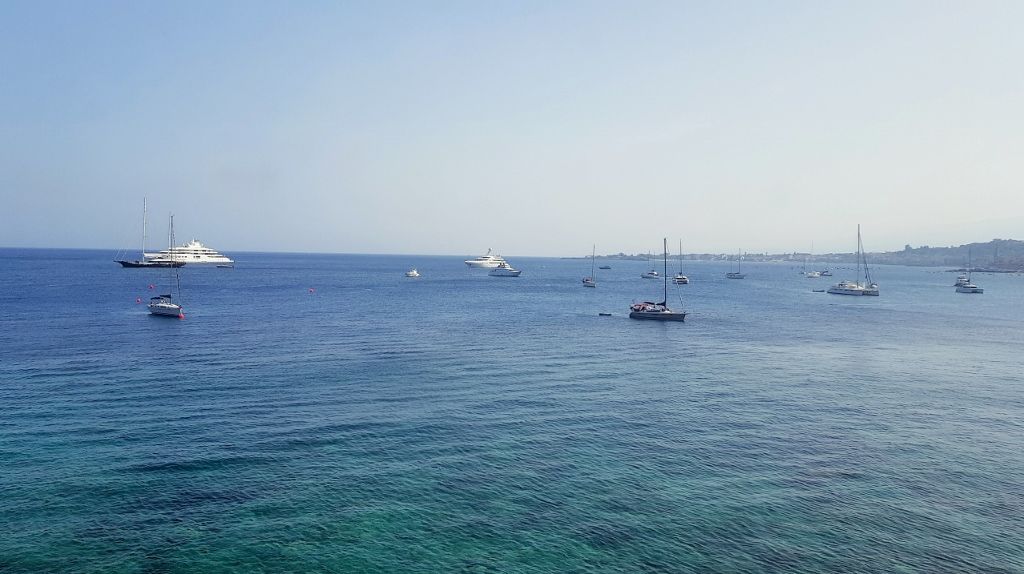 All the practical information you need to know about making this incredible journey - including details of the tickets, trains and stations is available here.