Discover why making the beautiful train journey from Oslo to Bergen is so special. For more than four hours you'll experience some of the best landscapes in all of Norway!

By Simon Harper
| about 1 year ago
InspireJourneysNorwayBeautiful journeys

The journey by train from Oslo to Bergen is one of the more obvious inclusions on this list of Epic Express Train Journeys, but we couldn't leave it out, as it is undeniably fabulous!
It is also a journey to be made sooner rather later, as more shelters are to be built along some of the most scenic sections of the route, in order to protect more of the railway line from snow falls.

However, what will be preserved are the two key factors that make this journey so memorable, the more than four hours of sustained, continuous travel through beautiful landscapes AND the elevation that the Bergen Line attains.
The height matters, as much of the journey is above the tree line, so on some of the most spectacular parts of the trip, there is no lineside vegetation to get in the way of the views.

As the trains leave Oslo behind, the first highlight of the journey comes after Vikersund when between there and Ask station, the railway skirts the shores of Tyrifjorden, which can be seen from the RIGHT. 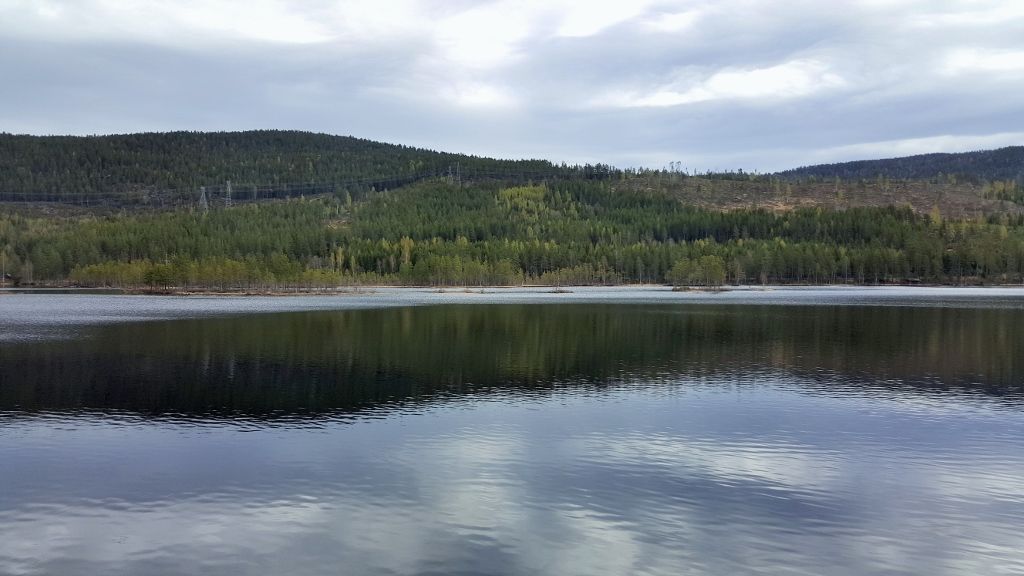 Though on a previous journey made in September, I encountered mist, rain, sunshine and snow and the view taken from this part of the journey looked like this... 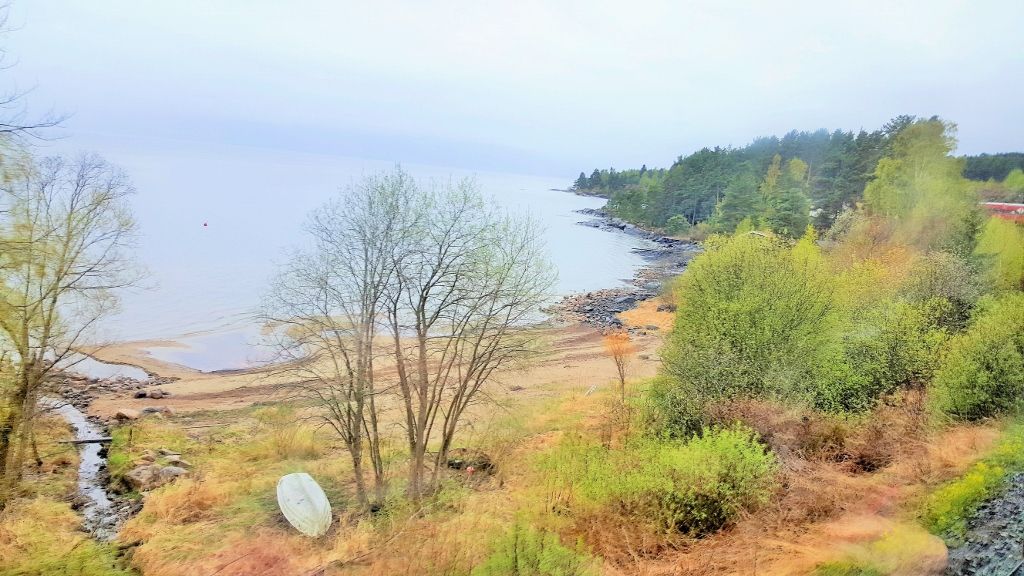 ...I had no idea the train was passing a fjord.

During the journey on the Bergensbanen, there are fabulous views from both sides of the train, but if you're only going to be making this journey once, then being sat on the left, when facing the direction of travel, has the edge - if you make the entire trip in good weather. 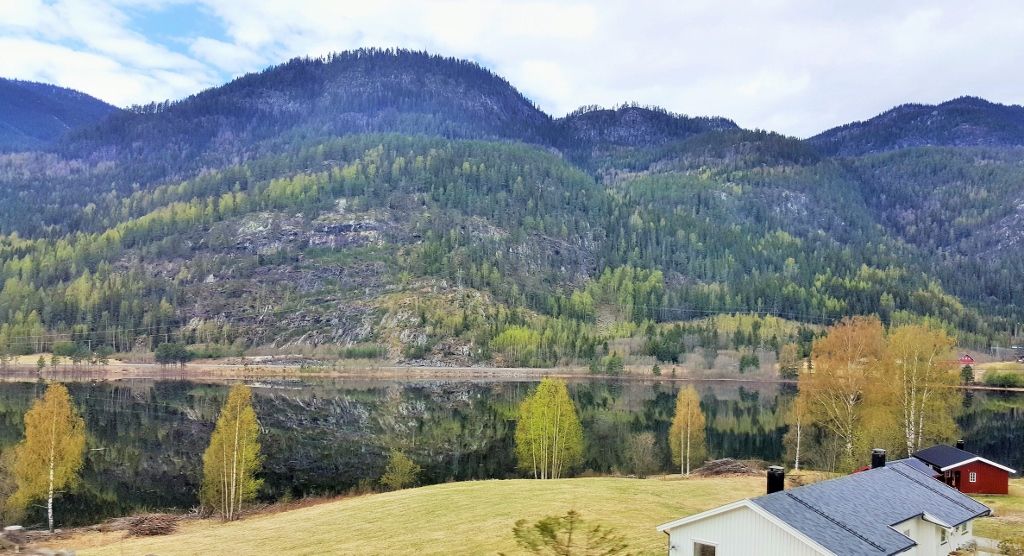 That is something to keep in mind, as you will be fortunate indeed to make the entire 6hr 30mins (plus) journey in sunshine.

Between Honnefoss and Al the best of the views switch to the LEFT as the train travels along side the Hallingdalselva (Hallingdal River), as seen in the video

The railway line will pass through a tunnel and then to the south of Fla station, the train will travel along the northern half of the eastern shore of a beautiful lake, the Kroderen. 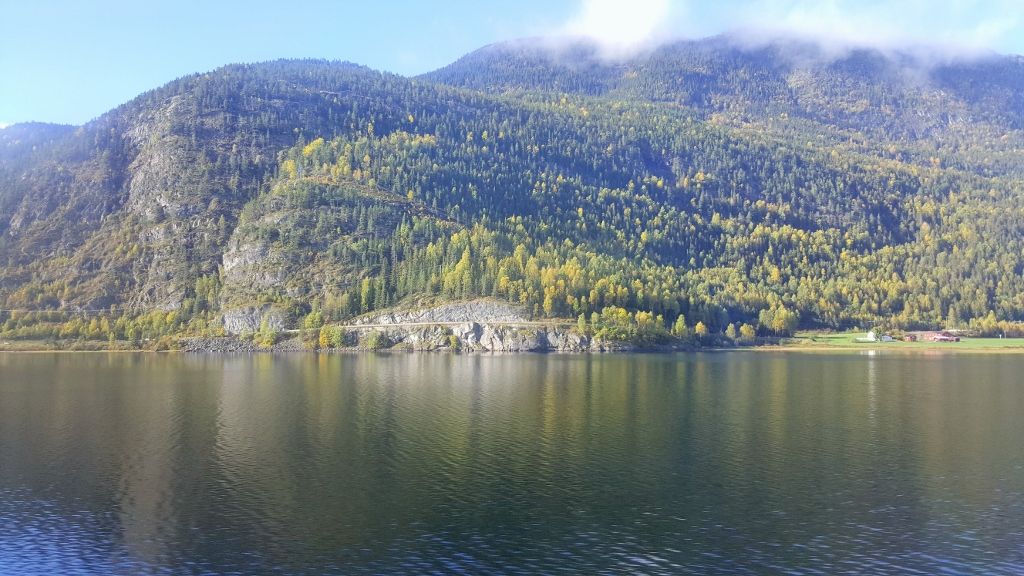 Then on departure from Al station the railway line begins to ascend, with spectacular views between there and Hol down to the RIGHT over the Strondafjorden. 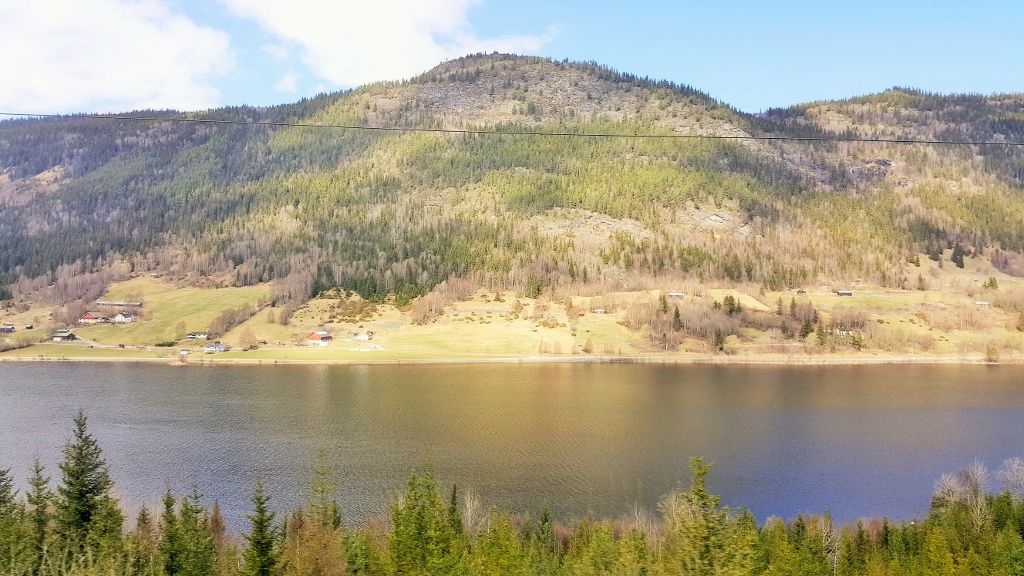 The next highlight of the journey is what truly gives this route its wow factor, namely the epic journey across the Hardangervidda plateau, the highest altitude travelled by European main line trains. 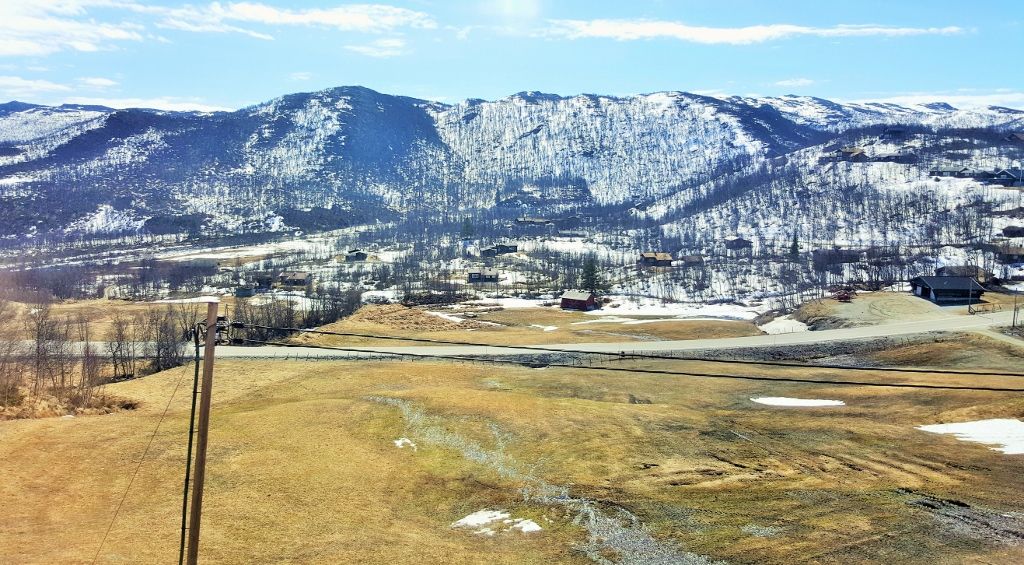 The trains traverse the plateau between Geilo and Myrdal with views stretching for huge distances across a landscape studded with lakes, so time your journey so that you’ll be travelling between these stations in daylight.

As can be seen from video and images captured in mid-May, what contributes to this journey's wow factor is the lack of trees and vegetation as you traverse the plateau, the only things that get in the way of the views are the snow shelters that protect the trains from the worst of the weather.
Don’t expect the high peaks that can be seen from Alpine routes, this route’s sense of awe comes from scale and a sense of other-worldliness – particularly when the numerous lakes that the train passes are frozen over, as they are for most of the year.

Initially between Geilo and Finse, which is the highest point on the Bergen Line, the best of the views are on the LEFT. 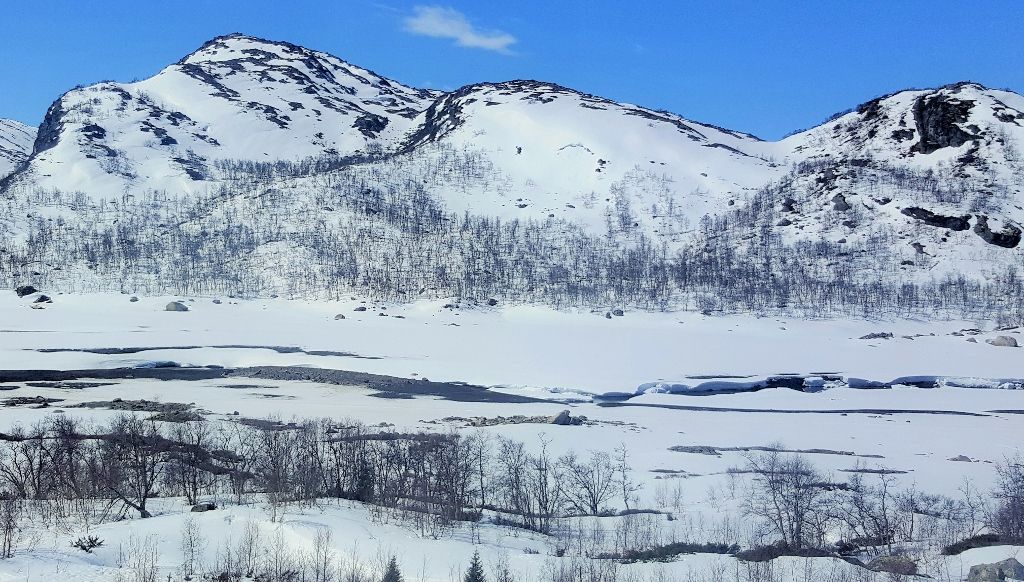 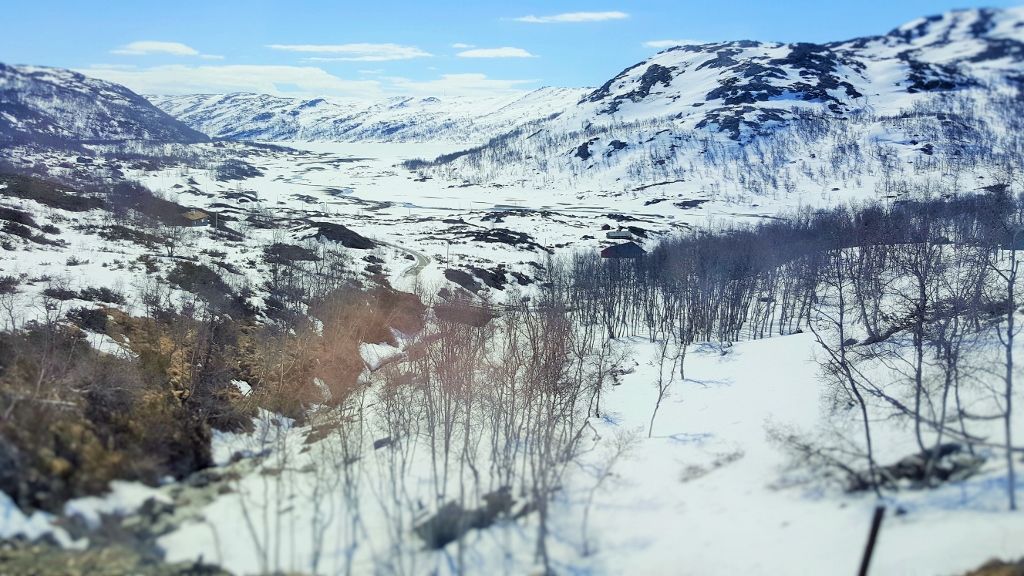 Between Finse and Myrdal the majority of the railway line is protected by snow shelters, which inevitably get in the way of the views, though as the train approaches Myrdal, the best of the views switch over to the RIGHT, which is where the frozen lake below can be seen. 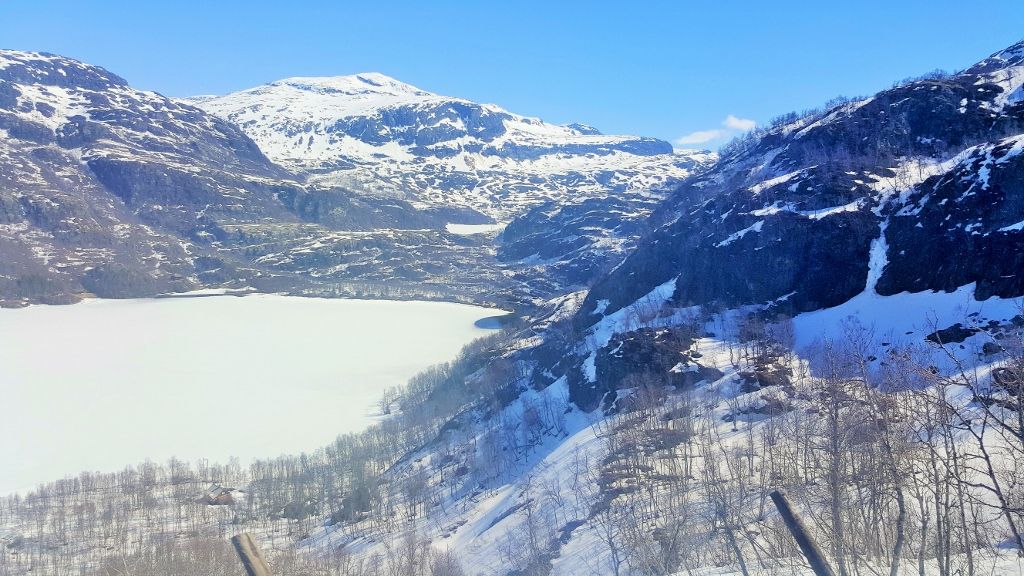 However, arguably the most spectacular part of the journey comes after departure from Myrdal as the train begins to descend to Voss, and here the pick of the views are once again on the LEFT.
As will be seen below, this part of the journey has the best views of distant mountains and has a more Alpine aura.

The train will descend, so that as it approaches Voss, it will share a spectacular high sided valley, the Raundalen with the river that can be seen below. 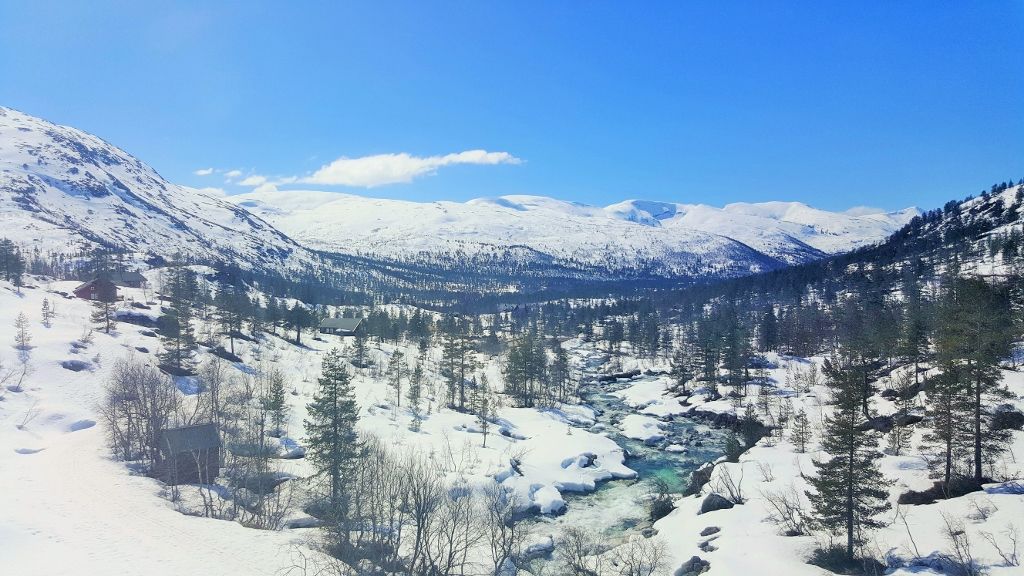 The cascading river will be on the left in a steep sided valley, but the bright sunshine made this impossible to photograph when ShowMeTheJourney made this train ride.

The must-see views aren’t over once the train departs from Voss, despite the railway line being back at sea level, because some of the best views of a fjord that can be seen from a train occur as the train heads to Bergen. 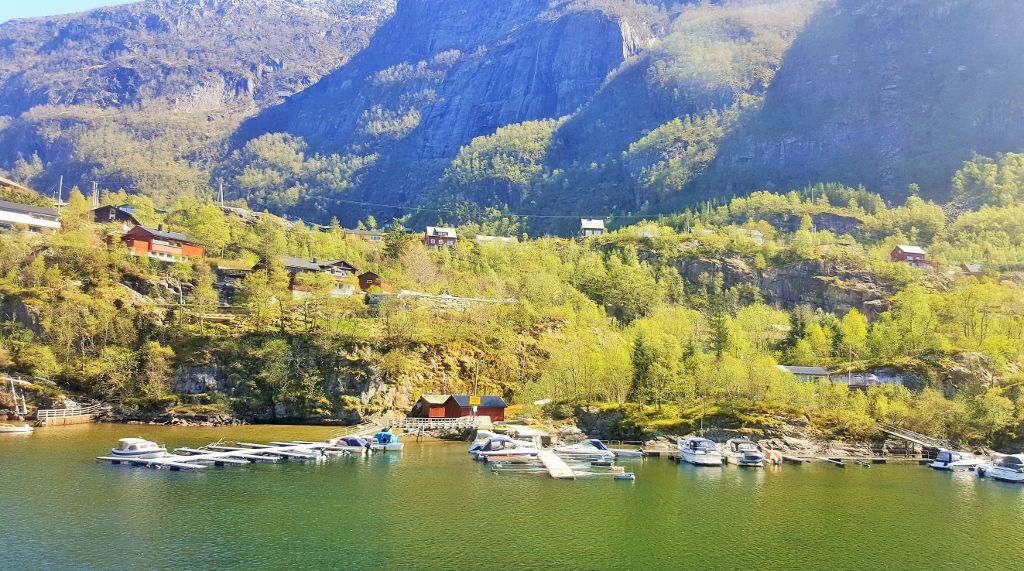 Initially, shortly after departure from Dale station, the views are on the left as the train passes by Stanghelle.

Then minutes later the full majesty of the Sørfjorden can be seen on the right and for most of the journey between there and Bergen, the railway runs along its shore and goes by the spectacular Osterøy Bridge.

Though you will need to have some luck on your side to see these views, Bergen has more rainy days than any other town in Europe! 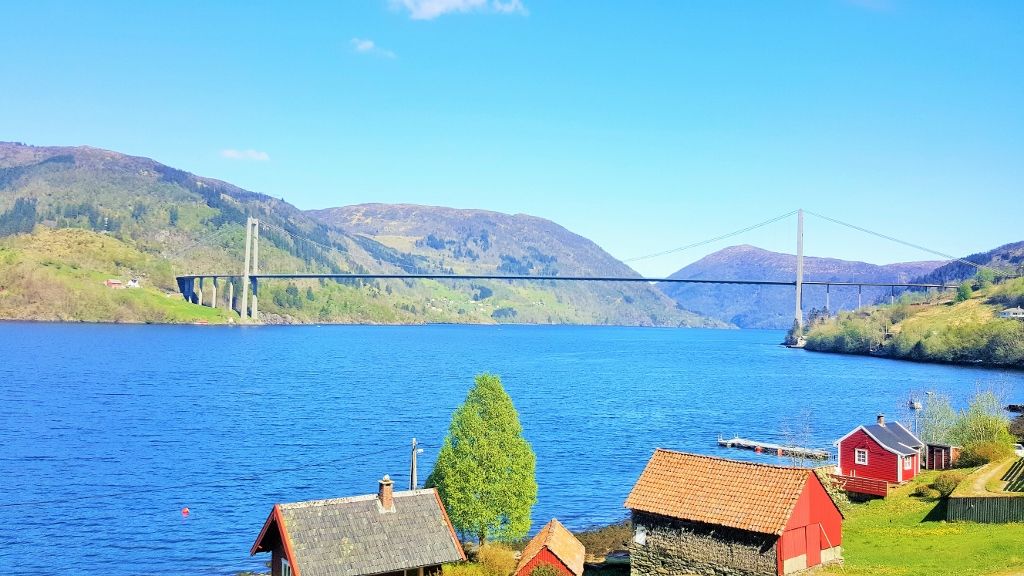 The train journey between Bergen in Myrdal is included in the Norway In A Nutshell itinerary, which usually involves travelling east from Bergen to Myrdal on the Bergen Line.
If you will taking this tour, try to take a seat on the left when boarding in Bergen, but then at Dale station, try to move over to the right hand side of the train.

All the practical information you need to know about making this incredible journey from Oslo to Bergen - including details of the tickets, trains and stations...