By Simon Harper
| about 1 year ago
InspireJourneysItalySwitzerlandBeautiful journeys

This lovely rail journey between northern Italy and western Switzerland had tended to be eclipsed by the other routes through the Gotthard and Lotschberg mountain passes.
Those train journeys between Milano and both Basel and Zurich,are fabulous, but they have been diverted away from what had been the most spectacular parts of their routes, due to the opening of two of the world’s longest railway tunnels; but this route between Milano and Geneve has escaped that fate.

The first highlight of this journey occurs around 40 minutes north of Milano when the railway line follows a path by the shore of Lake Maggiore, either side of Stresa - the views over the lake are on the right (when heading north).

The lake comes into view north of Arona and these two images below were captured as the train passed through Meina between Arona and Stresa. 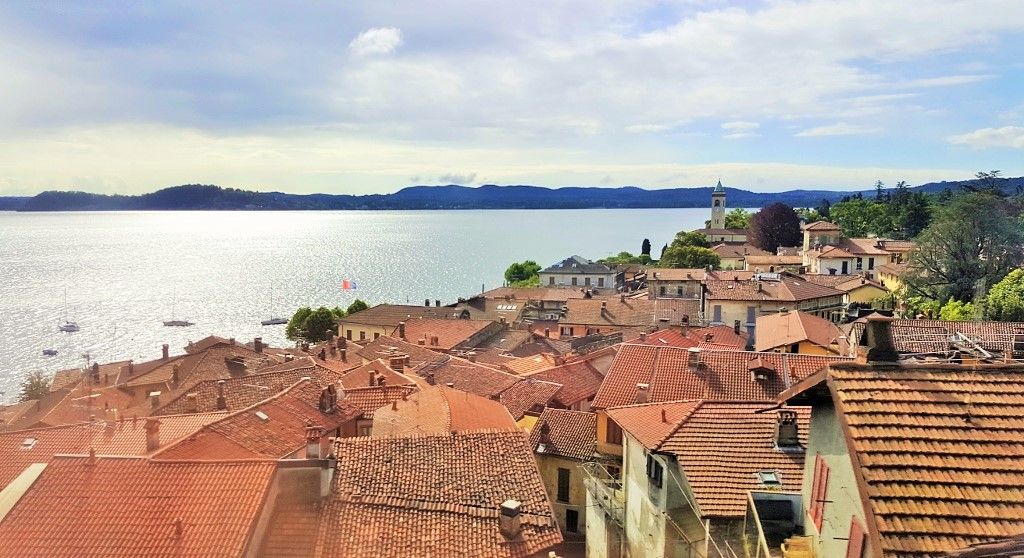 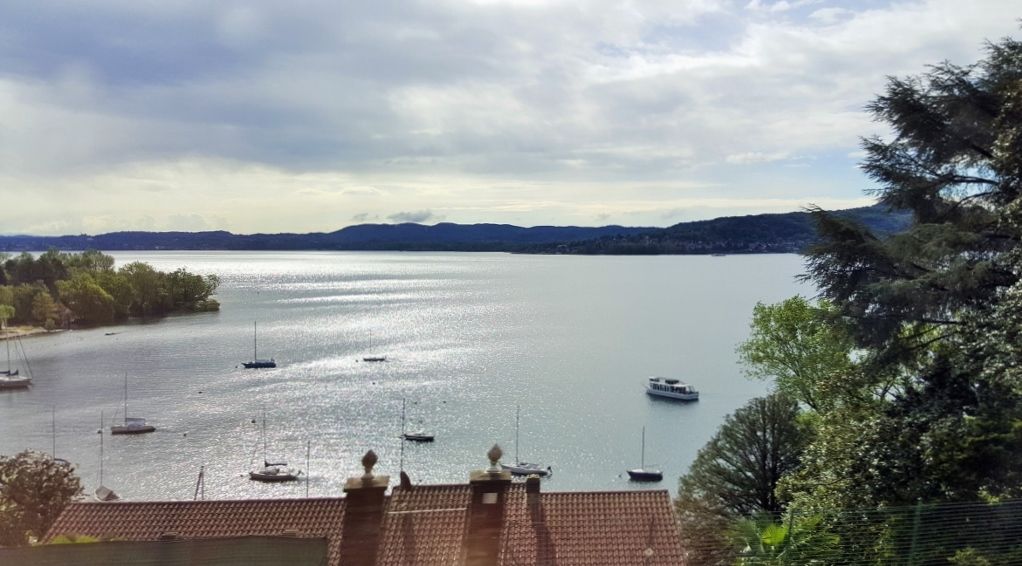 North of Stresa the railway line passes two beautiful inhabited islands on Lake Maggiore, the Isola Bella and the Isloa Superiore Dei Pescatori, which can be seen in this video taken from a train travelling in the opposite direction towards Milano.

This video also shows why you need to have luck on your side to be able to photograph these islands from the train, as on this part of the route, there are trees between the railway and the shore.
Though as this image below illustrates, the railway line is closer to the shore when travelling by the northern part of the lakeside. 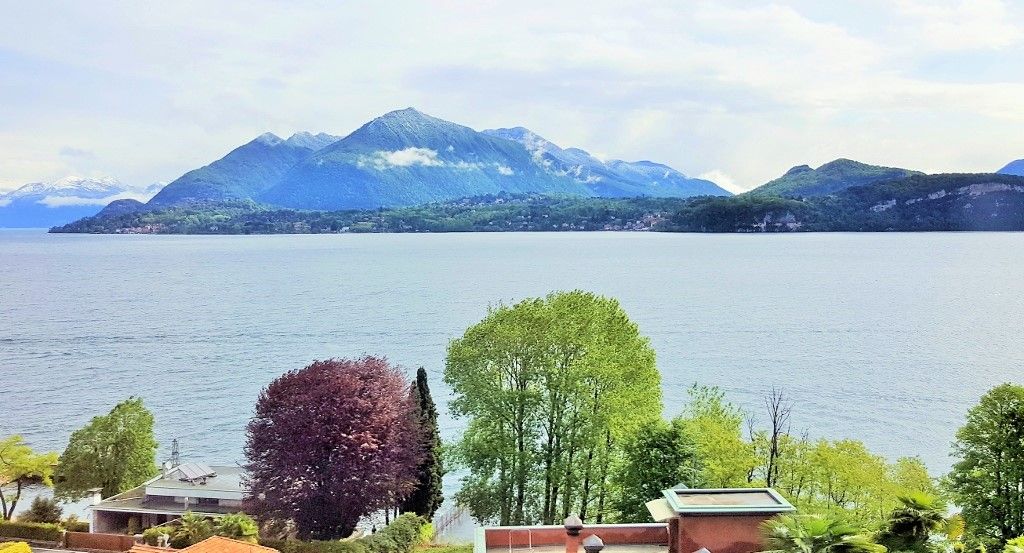 Once the trains leave Lake Maggiore behind, the best of the views remain on the right. The next highlight of the journey is this view below over Domodossola to the north of the station. 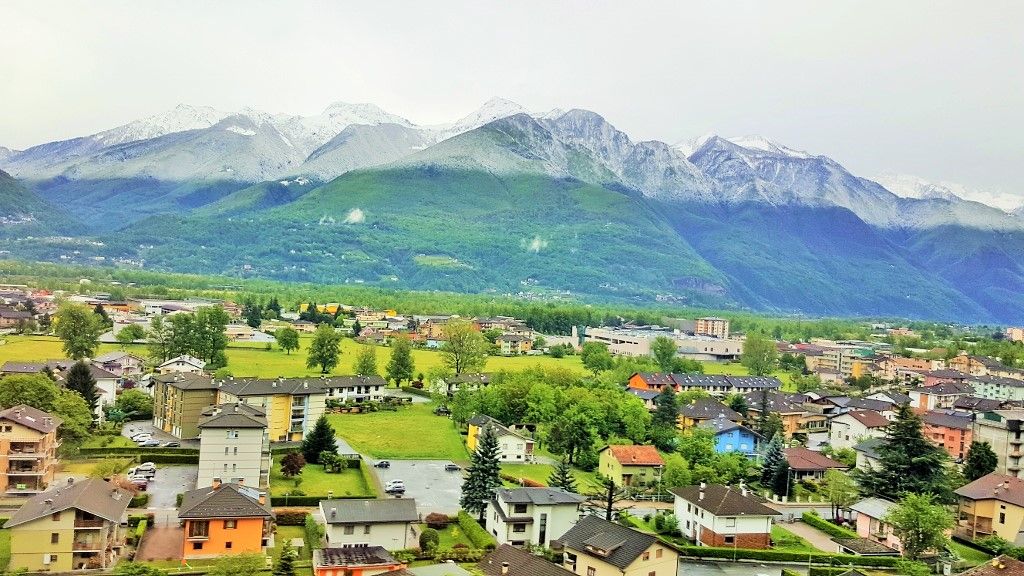 As the train approaches the Simplon Tunnel the valley begins to narrow, with the best views of the gorge over to the left (though this image below was taken just before the gorge on the right). 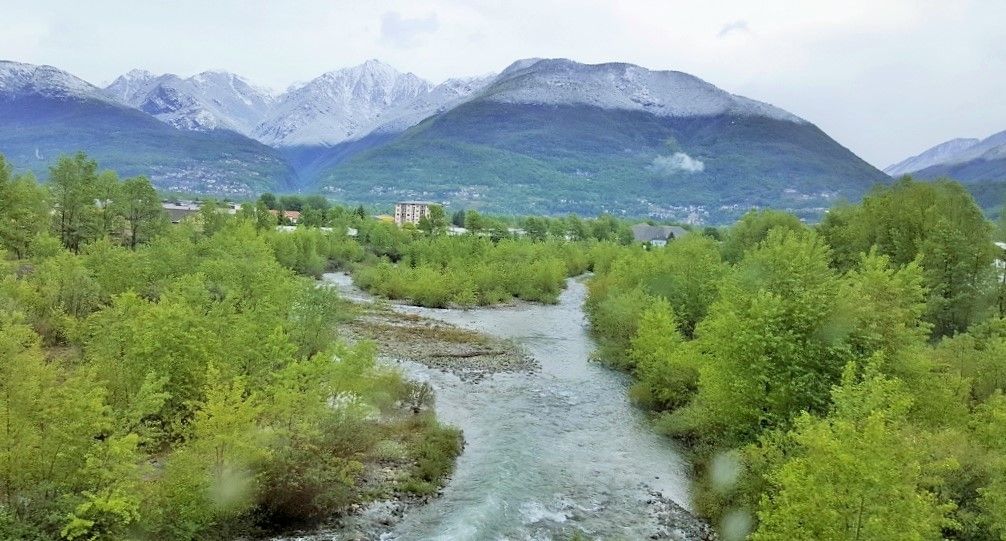 After the passage through the Simplon Tunnel, which for much of the 20th century was the world's longest railway tunnel in regular service, the train will enter Switzerland and pass through the towns of Brig and Visp.
The trains between Milano and Basel via Spiez and Thun have shared the route that these trains take between Milano and Visp, but now they divert off and head north towards Bern.

The route between Visp and Lake Geneva isn’t quite a match for the most spectacular routes through the Alps, but it’s still a highly pleasing journey through the vineyards on both sides of the line; though these pictures and video were taken on the right.

This image below typifies the wonderful landscapes between Visp and Sion. 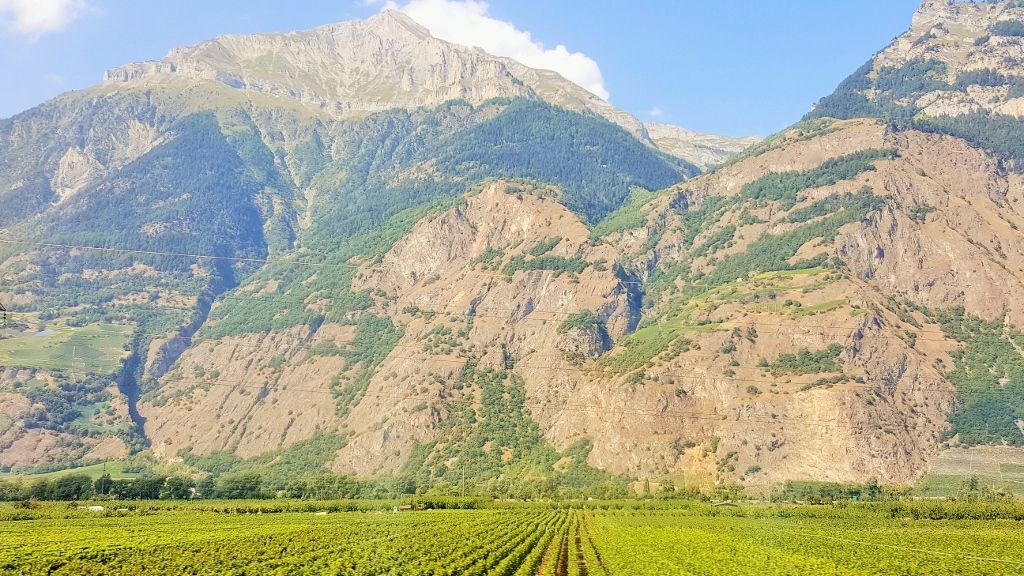 As the train arrives in Sion station, on the right-hand side look our for the view of the Valeré Basilica. 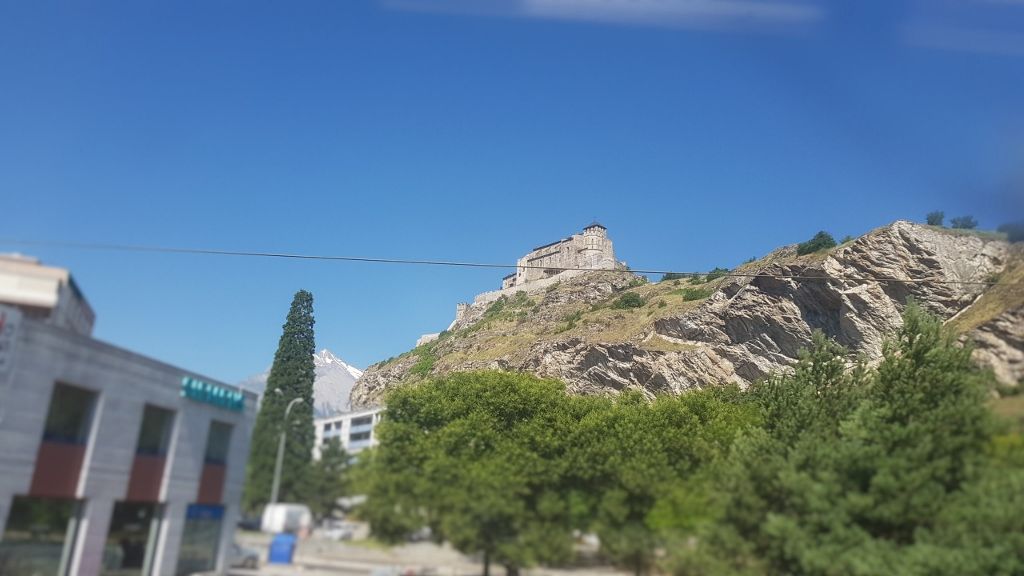 Between Brig and Lake Geneva the Simplon railway line travels through a valley carved by the River Rhone, and the train will cross the river just to the south of Leuk station, which provides for distant views back down the valley. 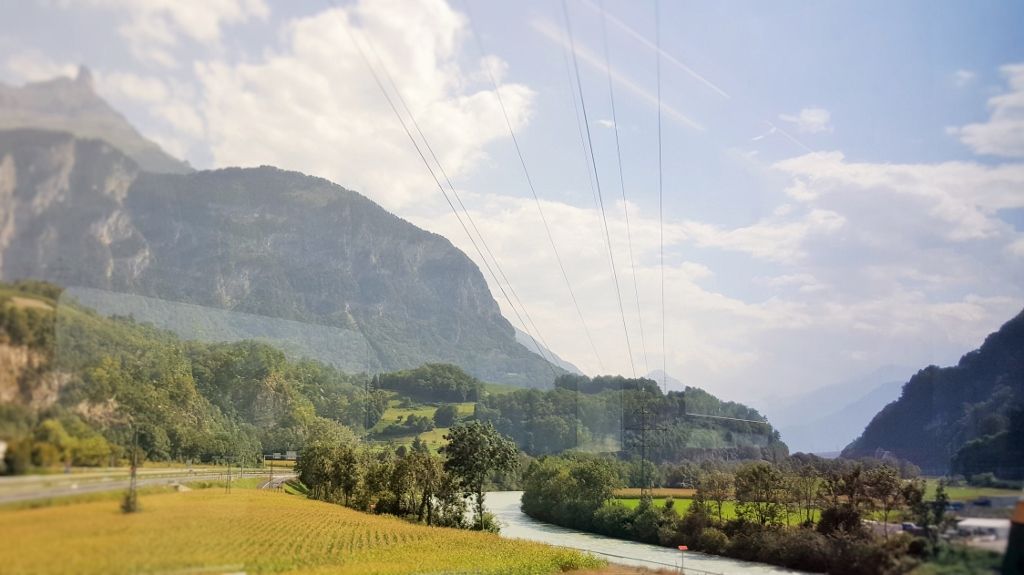 And the dramatic routes don't let up between there and Martigny. 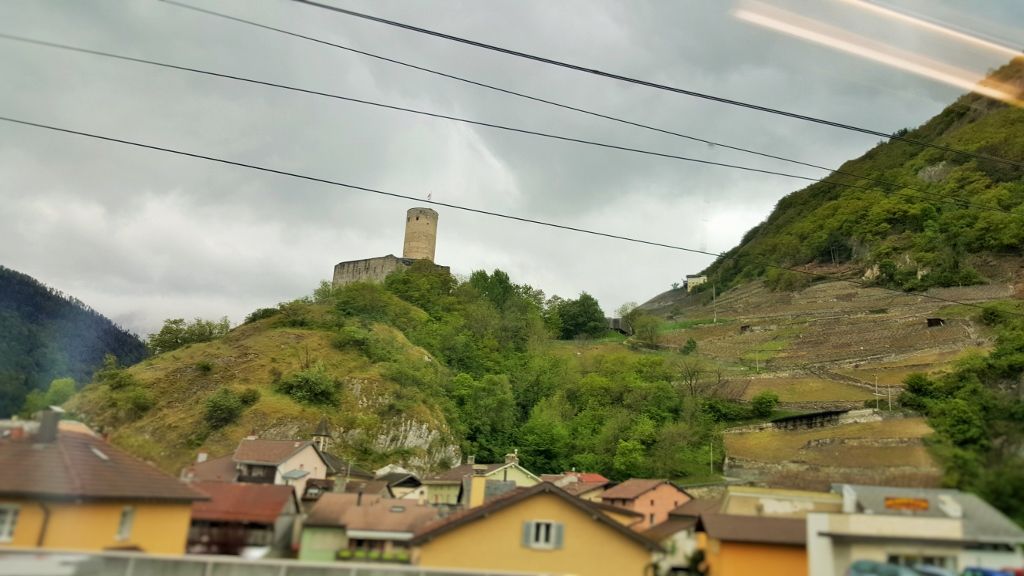 This image below was taken from a Mont Blanc express train as it ascended from Martigny station and provides a panoramic view of the valley that the Milano <> Geneve trains pass through. 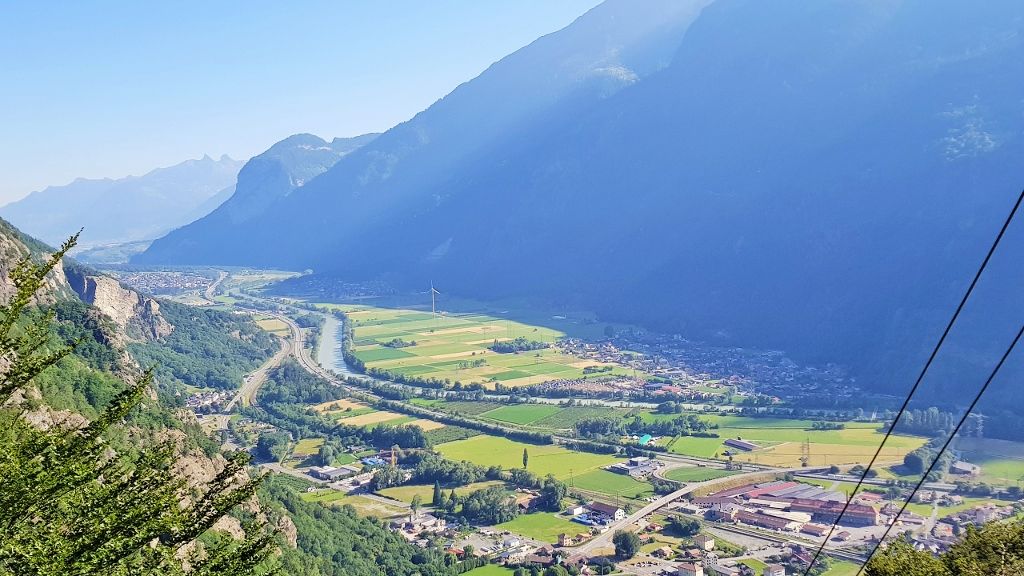 Then north of Aigle, around 10 mins before the train arrives in Montreux, Lake Geneva comes into view on the left.
Look out for the Chateau de Chillon, which can be seen to the north of Villeneuve station, shortly after the railway line starts to travel beside the lake; the picture was below was taken from a backwards facing seat 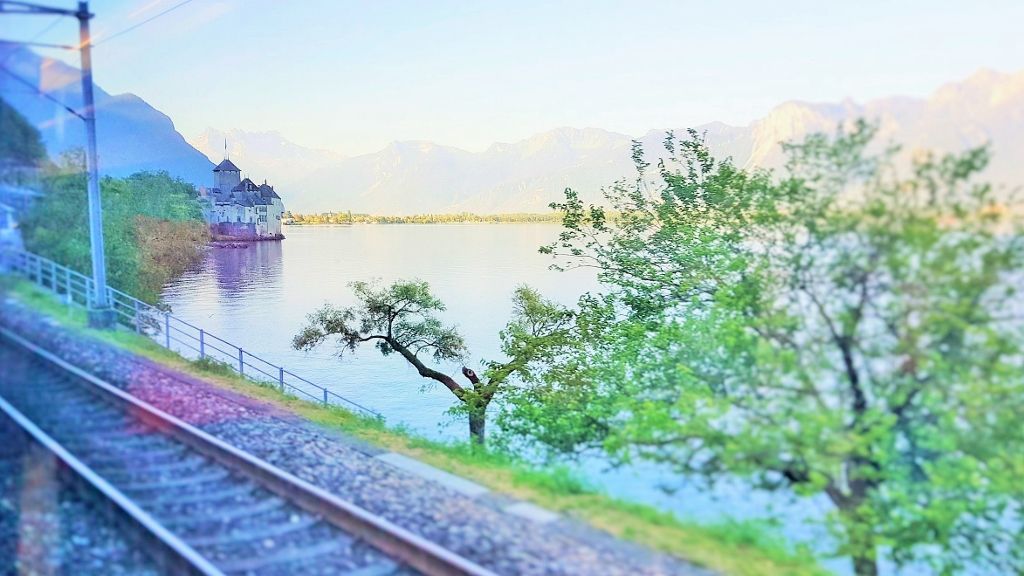 Between Vevey and Lausanne the train hugs the shore of Lake Geneva; though the weather has to be just right for the mountains on the opposite shore to be fully appreciated.

(The video was filmed from a train heading south, but it is the only journey SMTJ has yet taken with a clear view over to the eastern shore of Lake Geneva).

These views below were captured either side of Montreux station - to the south.... 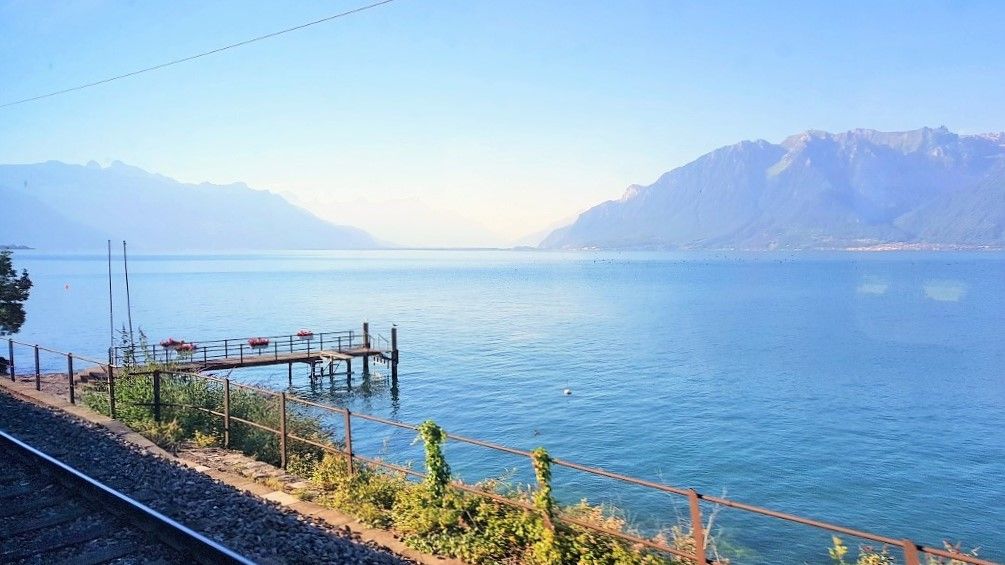 and then to the north... 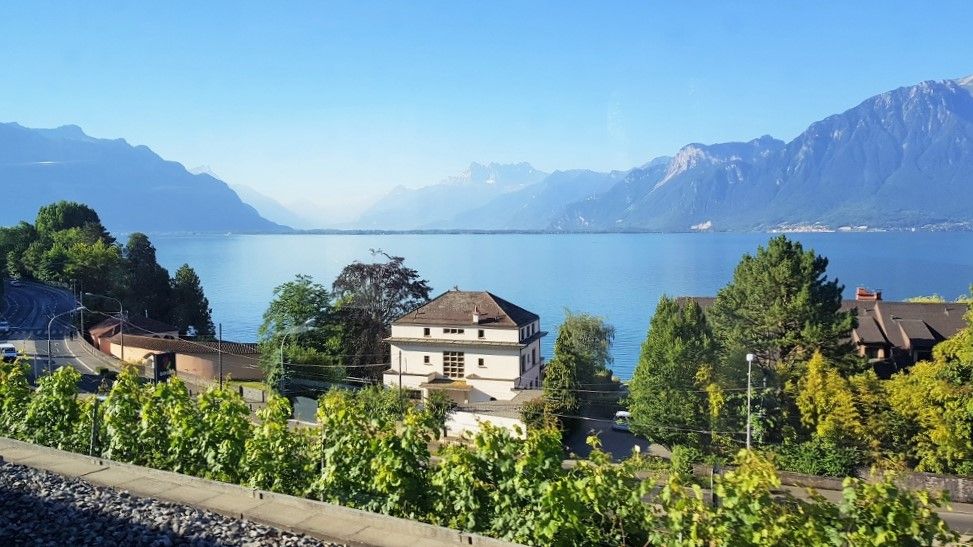 The highlights of the journey are more or less over once the train has reached Lausanne, the views over the lake are fleeting between Lausanne and Geneva; particularly from a single deck train, such as the EC trains that are used for this journey.

All the practical information you need to know about making this incredible journey - including details of the tickets, trains and stations..

This journey is also featured on the 'Popular Cities' rail pass itinerary.